Prices in Amsterdam – How to budget your dream Netherlands holiday

If you’re planning a trip to the Netherlands, you’re probably wondering how much you need to budget for your trip. In this article, I’ve used the prices in Amsterdam as a guide to give you all the information you need to establish your budget and prepare for your trip. I’ll also give you some practical resources and money-saving tips to ensure you’re not spending more than you have to.

Of course, the above figures are only guides and largely depend on your tastes and what you want to do while in the Netherlands.

Is the Netherlands expensive to visit?

Two things that make it more expensive are choosing to travel in high season, so June through to the end of August, and spending your whole vacation in Amsterdam, the Netherlands’ most expensive city. If you happen to be staying in Amsterdam in the middle of summer, you’ll be paying a premium.

It’s good to know, however, that if you choose to travel in Autumn or spring and travel around the country, not just in Amsterdam, you’ll find the Netherlands a lot cheaper.

Read: Our guide to the best time to visit the Netherlands

The cost of flights from another country to the Netherlands varies considerably.

Some great resources to compare flights are the Skyscanner website or Fare Compare.

Don’t forget that if you’re coming from a country outside the EU, you’ll need a visa for the Netherlands.

Using Amsterdam as a gage to set your Netherlands travel budget

For the remainder of this article, we’ll use Amsterdam prices to gauge the funding needed to travel in the Netherlands? Here’s why

What currency is used in Amsterdam?

Availability of cash – How much money should I take to Amsterdam?

Automated teller machines or cash machines are readily available in the Netherlands; whether you’re in a large city or a small village, you’ll be able to access your cash. Most places will also accept debit cards or credit cards. This is called ‘pinnen’ in Dutch, and you’ll probably see signs saying ‘pinnen’ where you can pay with a card.

Regarding how much money you should take, it’s generally advisable to limit the amount of cash you carry due to the risk of theft. In the cities, the pickpocketing of tourists on crowded public transport can be an issue. However, with cash machines and the ease of using cards almost everywhere, there is no need to carry more than a few hundred euros on your person.

Is Amsterdam expensive to visit?

We’ve provided a table above for easy reference, but if you’re looking for more of a breakdown of expenses, we’ve gone into more detail below.

Food and drink prices in Amsterdam will vary considerably as with anywhere in the world; however, I find restaurants here quite expensive compared to other parts of the world. So if you’re on a budget, street food and cooking for yourself will be your cheapest options. However, from that price range onwards, you can spend as much as you’re willing on food and drink.

When it comes to beer, you can find everything from your cheaper tapped beers to your specialty beer and IPAs. You can also find it everywhere, as you’ll be able to purchase it in the supermarket, bars, and restaurants.

The cheapest beer is from the supermarket, and you’ll be able to find options for around 1.00 euro. But, of course, you won’t be able to take that to a restaurant or bar with you! So if you can find cheaper beers at bars and restaurants, you’ll probably pay around 3.00 – 4.00 euro.

If you plan on having a drink at a restaurant or bar, you’ll pay between 4 and 5 euros for an average-priced beer. This will vary depending on the type of venue.

If you go to a more expensive venue, an upscale restaurant or bar, or simply like the finer things, you can easily pay upwards of 6 euros.

Bottles of cheap wine start from around 4.00 euros if you buy them in the supermarket. However, you’ll probably pay at least 4.00 euros a glass if you’re after-budget wine in a restaurant.

Buying a bottle of wine in a restaurant is usually cheaper than buying by the glass, and you can expect to pay around 12.00 to 14.00 euros or more per bottle.

When it comes to high-end wines, well, that’s up to you. How much do you have?

Price of coffee in Amsterdam

In general, the prices of coffee in Amsterdam will vary from between 2.50 and 3.50 euros for your basic pot coffee to your cappuccino. The Netherlands has a surprisingly limited offer when it comes to coffee compared to Australia, but it’s also cheaper.

Suppose you’re paying much more than 3.50 euros. In that case, it’s either because you have gone to a specialty coffee place such as Starbucks, whose coffee is about 3.75 euros on average, or because you’re buying it from somewhere fancy, that is generally more expensive.

It is easy to find cheap breakfast options in the Netherlands. If you’re staying in hostels, you can usually find hostels that offer complimentary breakfast. It’s a simple spread of cereal, toast, and coffee, but it helps. Alternatively, if you go to the supermarket, you’ll find plenty of pastries and breakfast edibles from 1.00 euro.

If you’re staying at hotels, you may also have a ‘breakfast included’ option. The included breakfast is usually a big buffet. This is included in the price of your room, but seeing as you can eat as much as you want, it can work out quite well.

If you want to go out and find something for breakfast, there are plenty of options, and you’ll quickly find something delicious for between 6.00 and 20.00 euros. That includes things from doughnuts, pastries, and pancakes to the more filling traditional and standard breakfast options.

Moods Coffee Corner is a delicious and popular café with reasonable pricing. Here are some examples

If you’re interested in takeaway foods, food markets or finger foods, you’ll have plenty of options.

On the cheaper side, you can easily find ethnic street foods and things like fries for between 5 and 10 euros.

For general takeaway foods, both international and Dutch, you could try either the World of Food or Food Hallen markets which will give you an excellent variety to choose from.

To try traditional Dutch street food, look for the below options

The average dinner prices in Amsterdam, as with all other meals, depends on the type of food you want and where you choose to eat.

Looking at your street food options, you could easily find a good meal for under 8.00 euros. Some other popular options include

Restaurant De Kas offers a weekly menu based on the freshest, in-season ingredients. 5-course dinner there will cost you about €70.00 per person, not including drinks.

The most significant portion of your Netherlands budget will likely be spent on accommodation. Depending on the level of comfort you require, paying a little extra is often worthwhile, although not always necessary. Obviously, the closer you are to the heart of the city, the higher accommodation prices become. So if you’re looking to reduce the costs, consider staying a little further out and walking or taking the bus to the city centre.

The average hotel price in Amsterdam is around €130.00. However, you’ll need to remember that it will be cheaper from the middle of Autumn through winter and the first week or so of spring. After that, the prices will start to go up for peak season.

Some examples of Hotel costs

There are many ways to get around Amsterdam. The bus, train, and tram systems are easy enough, and there is always the option of finding your inner Dutch and riding a bicycle. The below prices will help give you an idea about how much you’ll need to budget for public transport.

There are also longer, more economical tickets if you intend on staying in Amsterdam for a more extended period. You can find more information about public transport on the GVB website

Bike hire prices in Amsterdam will vary greatly, but generally, you’ll pay between 3 and 12 euros.

Taking a taxi in Amsterdam is one of the more expensive ways to get around because you’ll often be sitting in traffic. However, if you’re in a pinch or it’s raining, a taxi, or cab, is a great way to get around.

The basic hire rate of a taxi is €3.19, which will cost you at least €2.35 per kilometre. There are also surcharges and additional charges for waiting that can be added to the final cost, so this is only an estimate, but it will give you an idea.

If you’re planning on leaving Amsterdam and travelling further around the Netherlands, hiring a car is a fantastic option. It gives you complete control and eliminates the hassle of waiting for buses and trains. You can pick your car up when you arrive at the airport, or wait a few days and pick it up before you leave Amsterdam. There are different sized cars to suit your needs.

Next to accommodation, the cost of entertainment, visiting tourist sites and attractions or taking tours can add up. I always find choosing a few ‘must do’ or ‘must see’ things in advance means that I always have the budget for them when the time comes. If I need to, I’ll forgo something else, so I don’t miss my non-negotiable things.

If you love history, art, or just visiting museums, you can purchase the ‘museum jaar kaart’ or the yearly museum pass, which gives you access to over 400 museums in the Netherlands for up to 1 year. It costs about 65.00 euros, so if you plan on visiting more than four museums while you’re here, it’s worth it.

If you’re planning on staying in Amsterdam and using it as a base to travel out to other nearby areas, you’ll probably end up doing some day trips. Your other option here, of course, is to hire a car and drive yourself. However, if you’re on your own or enjoy meeting other people, day trips will give you some social interaction with like-minded travellers.

Other popular things to do in Amsterdam

Well, I hope that gives you as much information about the costs and prices in Amsterdam and the Netherlands and helps you budget your trip. Let me know below if you have any questions, and I’ll see if I can answer them for you! 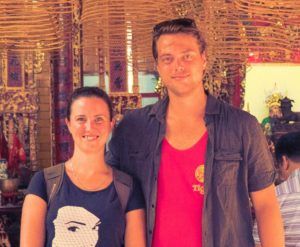 We’re Ben and Christine, immersive travellers currently making our way around Europe in a Camper van after a whirlwind year in South East Asia and New Zealand. Here you’ll find honest, up to date travel information, tips and stories to help you plan your ultimate trip.